What is the Massage Bed?
Our massage bed creates motion along the spine which gently stretches the spinal tissues and joints to reduce stress and improve mobility. Our Therapy Room features dim lighting and an essential oil diffuser to complete the relaxing experience.

How Does it Work?
While you lie on the bed the rollers beneath the surface gently move up and down the spine. The bed features options to increase the intensity of the massage to your preference. Both heat and vibration of the bed are available so you can tailor your session to what you may need each visit.

What are the Benefits of the Massage Bed?

Stress & Tension Release
Yogis know that stress causes tension. When we experience stress, our muscles tighten causing tension. This tension can affect the nerves causing pain in many parts of the body (not just the back). Your massage bed session can physically reduce the tension in the body by helping the muscles to stretch relieving pain and pressure in the back. The ambiance of the Therapy Room makes for a relaxing and enjoyable experience.

Improve Mobility to Create Balance and Strength
During your massage bed session the muscles along the spine are stimulated to flex and relax. The passive stimulation of these muscles can lead to a stronger, leaner and more stable back. The lengthening movements of the rollers gently massage the vertebrae and the tissue surrounding the spine. This massage flushes the tissues increasing circulation of spinal fluids and allowing better blood flow (meaning better health) to the area.

A Few Minutes to Be & Breathe
We all live busy lives. Taking 10 minutes to step into out Therapeutic Room for a Massage Bed session is a great way to reset before or after class.

How Do I Sign Up?
We are booking Massage Bed sessions at the front desk. Currently appointments are available Monday – Friday from 4-8pm and walk ins are currently available. Each 10 minute session is $10 or you can buy a package of 5 or 15 sessions for a discounted rate. Click here to purchase a session.

That title’s apparently the first statement in the Yoga Sutras. I know that not from personal experience, at least not beyond the personal experience of hearing our instructor quote the author Patañjali during yesterday’s awesome class at FORM{yoga}. And trust me, the title is about as Zen as this post gets, y’all.

Stretch. Now repeat 75x.
I’ve got fitness goals this year, one of which is to hit up 75 yoga classes. Now I was absent the day they taught math in school, but I figure to hit that target I gotta knock out 3 classes every 2 weeks. Doable. Or so I thought.

Yesterday’s class was the 6th or 7th attempt this year. But I made it, finally, to a class. That class’s name: Hips Don’t Lie. I kid you not. Hell, my hips don’t even stretch the truth hardly.

Polka-powered prana
The class was chill, so very chill … almost glacial as it turned out. At first though, I had my doubts. We were up in the (noticeably warmer) loft part of the studio, so I was thinking we’d be sweating buckets as we flexed our hips in ways that would bring shame to my puritanical ancestors.

And then there was the accordion. 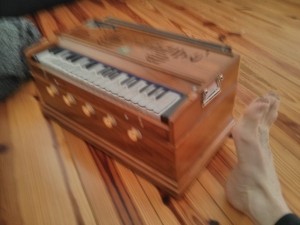 This is a harmonium, as seen through the hazy, chilly-chill post-class ambiance.
(Foot for scale.)

Well, make that a harmonium. I had no clue what the squeezebox-lookin’ thing was there on the floor at the front of the class, my teacher sitting on the business end.

I couldn’t help thinking, “If she thinks I’m starting my Monday with a polka, I’m outta here.”

But nah … a couple chords and a few Ommms later and it was back to being an intruguing conversation piece.

Hans and Franz and Patañjali
This was the first class I’ve even done with my eyes closed. It wasn’t volitional; we were instructed. And I liked it! Sure, as close in as we all were to each other, we ran the risk of bumping body parts.

Did I mention I was the only dude there? Hellooooo, ladies. I see by your bumper sticker you too have a child on the honor roll … Ah, my game ain’t what it used to be, and it wasn’t much to begin with. I hardly passed Go, and rarely collected $200.

But, said bumping didn’t occur. And neither did any the Hans and Franz-era pumping up of the gluteal region. No complaints there, though today I definitely feel some soreness in my maximus, medius, and minimus, which happens when you get it kicked, even slowly.
And that’s never a bad thing.

Check out a class at FORM{yoga}. You’ll be glad you did … and your ass will thank you. 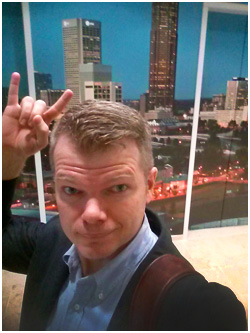 Derek Donald Hambrick writes words for a living and for fun, but not always in that order. Well-traveled and semi-witty, he’s a transplant from Sacramento, California, but an Atlantan at heart.

Maybe that explains his ability to switch deftly from punchy headlines to insightful body copy, polished for both web and print. Derek distills the memorable from the mundane, all while bringing out meaning (and the occasional laugh).

He married his sweetie pie over a decade ago and welcomed their son into a world that the Ham Fam is intent on improving one family – and one word – at a time.